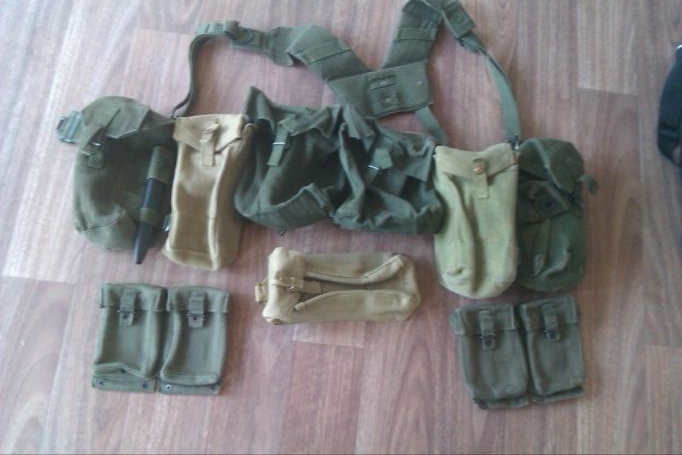 So after doing a lot of research about what webbing the Rhodies used in the bush war I was very pleasantly surprised that Pattern 58 webbing was commonly used (heavily modified of course) along with Pattern 37, Pattern 64, SADF Pattern 70 and locally made copies of the previous. Due to restrictions the troopie used what he could get hold of, and people coming from overseas were often told if they do: bring webbing, more webbing and even more webbing.

As it just so happened I had at my disposal a set of Pattern 58 webbing and a couple Pattern 37 pouches. After talking to my good friend O'Sullivan he gave me some Dutch G3/FAL pouches to use as well. After lusting over O'Sullivan's Patter 70 webbing I decided I could and would do as they did in Rhodesia and simply nick the idea and use whatever was to hand: in this case I had a set of 58 kidney pouches and some G3 pouches....and a tailor down the road. Normally such ideas would be branded as heresy however in the historical context I had found Mecca in canvas form!

In the picture is what I've using for the web kit, before I set to work naturally. As you can see there's more pouches than belt space and not shown is a rather scruffy set of G3 pouches and a pair of 37 pattern brace attachments (in RAF blanco). The webbing construction had now begun and I was keen to do a real mixture of kit as once you are willing to incorporate foreign pouches and non-58 pouches onto Pattern 58 webbing...it's an amazingly versatile and underrated bit of kit. Which is why I never got rid of it: there is a mystical charm where canvas webbing in concerned.

There were three crucial things in the bush: ammo, water, and ammo. So naturally I wanted this to reflect the big three, so to start making space on the belt.

First: I took the kidney pouches and cut them in two so I had two individual pouches (A very common thing to do in the bush and in the UK too). With one mounted on the belt the plan was to stitch a magazine pouch on the lid of the pouch as seen on the Patter 70 set.

Second: I had a waterbottle naturally however in true Rhodie style it would have another G3/FAL pouch sewn onto it to increase ammunition carrying capacity.

Third: I wanted to utilise the Dutch pouches as magazines would not rattle about inside being a set of two single mag pouches. (again in the bush war every effort was made to reduce rattle) That and they are, unlike other ammo pouches, not fiddly to use when under pressure. So far this gives me six magazine plus one in the rifle. Not bad but I'd like more...

Fourth: I took a 37 pattern ammo pouch and cut slits into the back so I could drop mount it on the belt instead of it poking me in the arm pits all day. I hear I can carry either two extra magazines or a speedloader and bag of ammo plus grenades.

Overall the set up is pretty sound as I can swap out the 37 pattern ammo pouch for a second waterbottle pouch with a G3/FAL pouch sewn on the front anyway. Especially as I will be nabbing a repro Fereday & Sons chest rig to up my mag count again for longer patrols. So far so good I feel as it has authenticity, customisation and is pretty versatile for the real world so in airsoft terms I'm sorted as I'll be carrying 110rnd mids and not 20rnd 7.62x51 Ball.

Then we hit the issue of paint and the wonderful frustration that kicked up.

There are no comments to display.