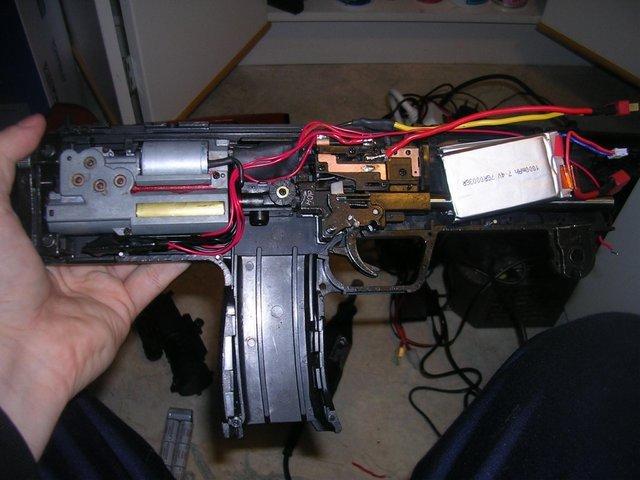 AEP-SMG's have small battery and nasty semi-lag... Not this one!!

Custom built cumputer-mosfet that calculates the time it takes to fire a shot, then pre-loads the system to a point just before the piston is released. When trigger is pulled, the shot is fires as fast as if it was a springer and the computer once again cycles the piston to the back. Can fire 3rd bursts if desired.

Kept well fed by a 1000mAH 7.4V lipo battery. The battery is monitored by the computer so it wont go below sertain voltage to avoid damage to the battery.

The computer cirquit is cut in two pieces: 1 below the gearbox houses the processor and its components, second is above the bb-feed / hopup that houses the mosfets for both breaking and fire. Design somewhat similar to Extreme-fire mosfets, yet custom made to this particular gun.

Gun itself is a Galaxy G7(mp7) with upgrades.