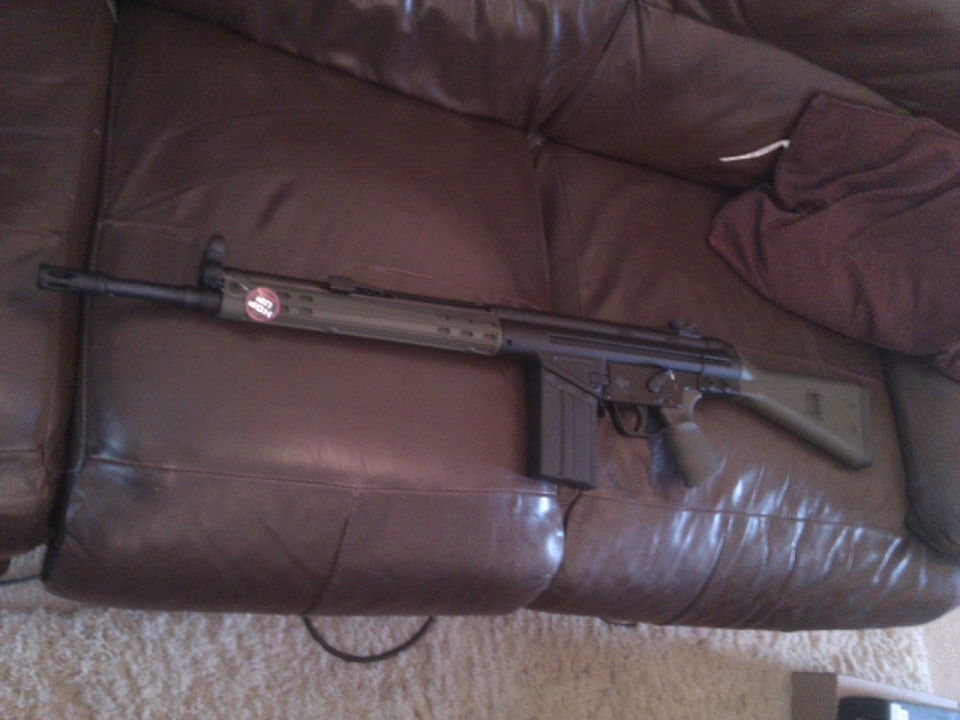 So I got into the office ready for a long boring day of invoices, telling people to use google when looking for plate carriers and the fortunate highlights of mercilessly taking the ###### out of my boss. But inside I was really excited as I knew the delivery had been and in that delivery would be my G3! Well I got the the office and OH NOES!! No delivery! So there I was cursing the recent snow fall with a raging passion, cursing UPS for being ###### and cursing the cat for mewing at me constantly trying to charm me out of this rage.

Naturally the inner squaddie got a grip and I got an office brew on the go while all the time cursing UPS and snow...but not the cat, the cat had redeemed himself by chasing my shoelaces..when the door went and I pretty much tripped over the cat to get to the door! I looked through the peep hole to see who it could be...no one?! Was it some chav playing silly buggers? Was it a dwarf with a pizza? NO! IT WAS UPS!

Sadly I had to deal with the stock delivery and let clients know their guns, bits and bobs has arrived and then sort out the shipping as well as the inevitable spring change looming while all the while the only thing in my mind was that G3!

So the G3 itself!

Made by Jing Gong it is indeed a Chinese AEG, now I know there is a lot of stigma, ignorance and misconception in the airsoft world about Chinese made guns...well this gun surely does put those nay sayers in their place!

The rifle itself is made from a sturdy polymer, yes it's a plastic gun BUT it doesn't feel cheap and nasty and there's very little if any wobble in it whatsoever. It feels sturdy enough to be thrashed about a bit that's for sure. Because of this it's very light too and rather nimble for a full size battle rifle. Yes I can still hear the queens amongst you shouting "BUT IT'S PLASTIC!"....well so what? It's light, robust and comfortable. Speaking as an infantryman: lightweight is good, no one wants to lug about more then they can get away with.

Ergonomically it's more geared towards the right handed shooter with the selector on the left side, this does not (as people seem to think) make it non-lefty friendly. You can change it with your left hand, it's just a bit awkward to do! And when you do flick your switch (hey ho) you get a very reassuring CLICK each time. I'm certainly liking it so far. The pistol grip does feel a little on the small side in my spade like hands however it is still comfortable and functional, with slight moulding for the shooters hand too it makes for a very nice grip of the weapon.

Magazine release is fully ambidextrous as it's the same as on your standard MP5: one on the right and the one on the trigger guard. The magazines fit into the weapon almost like a FAL or AK by that I mean hooking the front of the magazine into the housing then pulling the rear side back in to lock it place. However with the G3 the action is much more subtle than on an AK or FAL.

Grip with the handguard is very slim indeed which is nice and comfortable as there is no extra weight here. The result is a pretty nicely balanced rifle as once the battery (in my case 8.4 3300 NiMh) is in the stock and you've shouldered it to fire: feels perfect. As some of you are aware I am a fan of the Battle Rifle...a real rifle!1 Well to me this is how a rifle should be: proper round (in the real world) full length barrel and no damned RIS. It was a pure infantryman's rifle.

Performance: after throwing away the BBs, charger, manual and battery that came with it I popped in an 8.4 3300mah NiMh which is a very snug fit and I had to be creative with my wire folding to get the butt pad on again but I managed. I flicked it to semi and gave a few rapid shots: nice response, the response was pretty good so no dramas there...flicking to auto I gave here a quick squeeze...BRRRRAP! VERY nice rate of fire! And I do mean very nice! ROF was nice a fast, around the 800 rounds per minute mark...just like a real steel LMG so I'm very happy with that one as I intend to use mids only once I build up a healthy supply.

Chrono: using .20 Blaster devils out the box it was doing over a course of ten shots we were doing between 348fps and 355.2fps again: very happy with that as a few mags through her will settle that spring in nicely. The hop itself gives decent results and the back yard accuracy is darn good. I'll be taking her out to skirmish on the 24th and we shall see how she does however I'm confident that she'll hold her own.

Overall I am very happy and very impressed with the build quality and performance of the Jing Gong G3A3 and I think the only upgrades for now would simply be a 6.03/6.04 tightbore barrel, I was going to put a Madbull Shark hop rubber in but for now I don't feel the need to.

There are no comments to display.