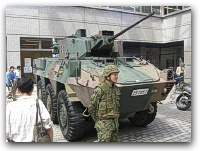 Well it’s been some time since I’ve added updates here (as you may have spotted). Now with the recent upgrades that have been done to the server we’re back to speed and full capacity again, and I’m near a net connection occasionally. It’s a bit later than I wanted to put it up, but here goes. FarEast has added to the forums his report from his visit to the Shizouka Hobby Show 2006, here it is:

The Shizouka Hobby Show 2006 What can I say? Mixed reactions really about the show, I cost me around Ł50 GBP or $90 USD to get there so my expectations were high. The hobby show this year was held at the “Twin Messe Center” in Shizouka City and after a pleasant ride on the Bullet Train I arrived and met my brother at the ticket gates.

The show was spread over the two centers and all the major model companies were there, names like Tamiya and the likes taking center stage. My first job was to over come the excitement and the 5 year old in my from racing around the center checking out all the latest toys, such as micro RC helicopters that fit in your palm or the latest AI Robots from Sony, secondly to find the information desk to find out just who was at the show!

This is were I got disappointed, It seems that companies like KSC, Western Arms and Tanaka do not attend these shows as they don’t have a PR budget and if they do it doesn’t cover having a stand at the largest hobby show in Japan.

So with my hopes downcast I headed to the Tokyo Marui stand, now this is where I cheered up! It was big, bigger than their last stand at the Blackhole show when pushing the new M14, They had all technical reps there so they could cover any question you might have relating to their products, sorry guys, now sexy short skirt reps to be found here!

I would like to take this time to thank those that submitted questions to me as it can be a bit hard being the reporter, photographer and the ever eager customer, so having those questions on my PDA really helped.

“Type 89 Buddy” With a recommended retail price of Ą50,000 (Ł240.00GBP or $448.00 USD) this is probably the expensive gun Tokyo Marui has released to date, why you might ask? Well as one of the members here said, “It’s the Gun of Japanese Armed Forces, of course they are going to do the best job they can on it!” and they certainly have!

The Type 89 is full metal, yes the upper and lower receiver, barrel, everything that should be metal is and you feel it, the hand guard is made from very high quality ABS and there is absolutely new flex in this weapon what so ever! All the markings on the weapon are 100% accurate with nothing left off.

The main feature of this gun is the Mechanical selector and the Type 86 just like the real steal has four settings, Safety, Semi Auto, 3 Round Burst and Full Auto. It also Sports a new EG1000 BT which is designed to take the added stress caused by the 3 round burst. Now as it has been mentioned the Type 89 takes a stick battery in the fore grip and not in the butt stock like other solid stock weapons, why you ask! Well it’s because it’s not all that bib and is very narrow compared to that of the M16, G3 or MP5 variants. Now this isn’t to say a modification can’t be done to the wiring and also a self styled battery pack that would fit in the stock, but alas it will not fit the larger battery packs that are out there.

As you can see standard and high capacity magazines are already to go and they both feature a new spring plug that enables the user to use every last BB in the magazines rather than having 3 or 4 left after you have emptied it. Also on the release day a Vii selector switch will be available which is the version used on all current version used by the Japanese Coast Guard and Police Units and also a 20mm rialto mount scopes.

So how does it feel? The Type 89 is amazing! It’s actually as close to perfect as a stock weapon can be. The materials and construction leaves nothing to be desired and I would almost venture to say it has more in common with a training weapon than with its other Tokyo Marui siblings. The trigger has a very nice feel to it and on pulling back the trigger results in a very meaty whack, 3 round burst is the same and it’s hard to distinguish the shots apart, fully auto is also very impressive. Shouldering the weapon is swift and feels very comfortable. Those who use iron sights over scopes or red dots will not be totally lost with these sights as they are very similar to the Heckler and Koch’s.

So when will the Type 89 be released? Soon, very soon. Tokyo Marui’s staffs were not at liberty to say exactly when only when people get their bonuses in, which is the end of this moth or the beginning of next. But judging by the crowds the demand is huge so the likely hood of people outside of Japan getting a 1st batch rifle is very slim.

M1911A1 The next release is the M1911A1, which is a GASBLOW BACK gun. It is 100% plastic but features a new coating that gives one of the most realist finishes to a non metal gun I have ever seen! Picking it up was very disappointing as it seems way to light even with the magazine filled with BB’s and gas. The magazine is a single stacker but will take 26 BB’s and will cost a little under 3,000 Yen.

The construction is excellent and given the opportunity to have a go I decided that it would be a small sacrifice to make to give you guys the low down. The blow back on this gun is outstanding and is a real joy to fire; the light weight slide enables less gas to be used in pushing it back while allowing more to be used to force the bb through the hop unit and down the barrel.
The gun will be shipped next month in time to hit the market probably before the 25th (Pay day). Watch the 1911 in action here.

Future releases Well I’m sorry to break the news but it looks like the TMP, Vz and MAC10 will not be released until next year some time. But we will not being seeing them for a while yet. Saying that though the next release for GBB will be the Desert Eagle .50AE and the Glock 17 these look like they are ready to be released later this year. Still no news on the L85A1.

Accessories The MP7 Pro light adapters will be hitting the shops NOW and will be available probably next week.

Well that about raps it up on the Tokyo Marui side of things, I’m disappointed that KSC or Maruzen didn’t have a stand but one thing is for sure, once the Type 89 is released I will be getting one…….
FarEast, (Forums)

This is all slowly being converted into the new site format, but for the moment you can find all the old Projects, Reviews and Articles.
We also have a bit of a wayback machine and a few sites that we have permission to host including archives of Practical Airsoft and Just Pistols. Please bear in mind we don't own these and are hosting them to preserve their history.

Latest from the forum

Buy Me A Coffee

Buy Me a Coffee

Providing news, forums, reviews, articles and information to the Airsoft community for more than 20 years! If we can help you drop us a line.

News in the forums

Cookies are used improve your experience. We'll assume you're ok with this, but you can opt-out if you wish. Accept Read More