Don’t worry, the page numbers haven’t gone from the bottom of the news page, it’s just that the news for each month is placed in the Archives area of the news at the end of the month (welcome to the 1st of October). Where is time going these days?

The front news page only shows this months news, infilling with news from the previous month if there’s not enough to fill the news page yet (cunning eh?). If you want to find a previous news article, either use the search feature, or have a butchers in the archive area.

Well after a pleasant surprise in the post this morning I’ve just completed the review and photo-shoot of the new Samurai Elcan replica from AirsoftSupplier.

When you order gear from HongKong and overseas it’s hard to guess how well built something will be simply because youcan’t see it yourself. A simple example is the Marui copy of the AimPoint, which although “looking” like an AimPoint severely disappoints in the flesh.

With the Samurai scope my honest worry was that it too might be of a lighter build than I’d expect, but these worries were quickly dispelled when I picked the box up. This is one well built scope – weighing in at a hefty 765g.

The box is foam lined in such a way that in order to test the rugged nature of this well built scope you’d most likely have to drive over the box in a truck; something I’m glad ParcelForce didn’t try out this time. I’m sure the scope would survive, it’s just that crushed cardboard isn’t that photogenic. (Samurai Elcan review) 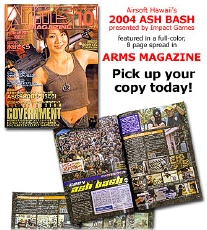 Pat over at AirsoftHawaii asked me to add some news about their last event, ASH BASH ’04 and ARMS magazine. They have been featured in issue #10 and will be issued in issue #11:

Thank you to everyone who came out to the Airsoft Hawaii ASH BASH presented by Impact Games LLC. The ASH BASH had over 300 people in attendance!

Airsoft Hawaii gave away over $7500 worth in prizes with almost every prize package including a gun. None of this would have been possible without the generosity of the sponsors and all the help of the volunteer staff of Airsoft Hawaii.

Special thanks to Impact Games, Power Edge Hawaii, ARMS Magazine, and The QProject for coming out to the game and we hope to see you again next year! Airsoft Hawaii

News just in from Jimmy Fan at Intrudershop are some lovely shots of their upcoming products. The AK104 has been released to us as an exclusive (it’s not been shown anywhere else).

A big thanks go out to Jommy and Intrudershop for emailing the photos over to us. New parts from them include upgrades for the Marui Hi-Cap 5.1, and a series of AK products. Here’s the latest:

JML over at 858Airsoft.com has dropped me a line with some news about their site. While still new head on over to have a look at their latest reviews, including a review of the Uncle Mike kydex holster, and a new type of cooling bandana:

Not a big news article since our site is still fairly new.

But 858Airsoft.com forum users noticed that for most of the day (September 28th) the Forums had been down. We managed to resolve the issue, and looks like we only lost a couple of hours worth of data. JML, (858Airsoft.com)

Kent Wu over at AirSplat.com let me know that they have two job openings available at the moment. Airsoft related jobs really are few and far between so if you’re interested, best drop them a line ASAP. Here’s the details of the posts:

Please complete application at http://www.airsplat.com/app.pdf and fax to (626) 401-0600 with resume (if applicable). Please attention to
May.

We do have a referral program in place. The referrer of any candidate who
is
hired and employed for at least 6 months will receive a $300 referral fee.
Therefore,
if you have any friends, please let them know as well. Kent Wu, (AirSplat.com)

Some more details on the XM8

Because of the nature of the information that appeared concerning the XM8 (as previously posted) and the lack of information that we could find, I asked Paul at RedWolf if he could ask around, and he generously asked around and spoke to a few people. Here’s the results that Paul came back to me; I’d like to stress that his results are based on the limited information available:

The kit isn’t a PGC product or pre-release. PGC looked into an XM8 but after market research indicated a limited take-up shelved the product after getting no further than the initial CAD research and development. The guys at PGC have seen the shots, but they don’t know anything more about it.

The videos and pictures of the kit seen look genuine, and are almost certainly from HongKong. Based on the background it is likely that the video was shot in a Hong Kong suburbs. As the kit isn’t coming from a known and established manufacturing house you can’t expect a great deal in terms of build quality. We can be certain that someone has hold of some moulding gear, and the finished version seen in the video is almost certainly hand built. The fact that someone is selling it through Japan yahoo means that they have a business registration and bank account over there.

My thanks go out to Paul for doing the research on our behalf. Unless anything else appears that can be traced (someone recognises the person in the video etc) or looked into this is all the information that can be found out at the moment. End result? It’s most likely not a hoax, however it does come from an source unknown to the Airsoft houses in HK.

I’ve heard from Mark Jones that he’s recenlty opened up a new store by the name of Northwest Airsoft Ltd. Here’s the latest from him:

I have opened up an
Airsoft business based in the Northwest of England (Northwest Airsoft Ltd)
selling a wide range of Airsoft equipment and accessories to the whole of
the UK.

I am open mainly In the evenings and Saturday’s for mail order business but
callers are very welcome if they give me a call first. My telephone number
is 01524 841241.
You can get us via email at sales@northwestairsoft.co.uk or on our website. Mark Jones, (Northwest Airsoft Ltd)

For anyone looking for a bit more info about the XM8 kit news posted earlier there’s a video of one of the completed kits floating around the net that Qhs in the forums uploaded. You can find the video here. The video is 2.8Mb in size. With information about kits such as this (little to no information about the source available) rumours are abound about the location of the kit manufacturers and if it’s a true or not – as ever best to make your own mind up, and be wary before jumping to conclusions.

All that you can tell from the shots and the video is that someone somewhere has made one of these kits, and that someone with 40 positive trading feedbacks on the Japanese Yahoo auctions is advertising them on a pre-order basis. Past that, there’s no more than can be assumed. There are rumors that it’s a hoax.. but seeing as the auctions aren’t valid for international orders there would seem to be little point in attempting such a scam. With any luck someone known and trusted like Star or PGC (who we know are looking into making one anyway) will mass produce some XM8 bodies in the near future.

Alastair Legge over at Alamo Toys has dropped me a line to let folks know that he’s now got a basic website shop up listing his stock. Whilst he’s new to the online retail game, everyone’s got to start somewhere.

You won’t find the relatively expensive AEGs and the like on there at the moment, however there’s plenty of value springers and other fun toys on there (the Leopard tank for example). Ł35 for a BB firing RC Leopard tank certainly isn’t to be sniffed at considering the fun they provide.

Jeff dropped me an email as he spotted the P11 details (replica of the HK underwater pistol) on BR Pineapple’s website, and was interested in getting hold of one and any possible systems that might use the new mini-moscarts that are out there.

After doing some digging I’ve come across a new kit that uses the mini moscart range at Gun357 in Japan. You have to bear in mind that it’s effectively a model kit, so may well not be up to the rigours of skirmish use. Here’s some shots of it:

I don’t know of any dealers that ship to the UK/US that specifically stock this item, but you never know.

As seen over at AirsoftRetreat there’s news of a custom M14 from UN Company featuring authentic parts, designed for hfc22 use out the box, and working fire select (full auto and semi). Cost is 1685USD each.. so not cheap, but the production quality looks great.

Anyone for an XM8 AEG kit?

Thanks to our roving news reporter 14692 in the forums we can add some news of a new XM8 AEG kit that’s coming out for the Marui G36 series. To say that this one might prove just a tad popular is a minor understatement.

The original post can be found here. From what we can see so far the kit is just a small time production and severely limited in number. At the moment units are sold to winners of the Japanese Yahoo auctions on a pre-order basis. The price per kit is listed as 49,800Yen and the rifle can take an 8.4v 1100mAh battery in the front grip. Again a big thanks go out to 14692 for doing the digging.

Oh, before I forget for the night (er…morning). G&P have released news of their Jungle Series Special Forces Kit. Designed to fit the M16 series, it will take the G&P M4 QD silencer fitment.

This is all slowly being converted into the new site format, but for the moment you can find all the old Projects, Reviews and Articles.
We also have a bit of a wayback machine and a few sites that we have permission to host including archives of Practical Airsoft and Just Pistols. Please bear in mind we don't own these and are hosting them to preserve their history.

Latest from the forum

Buy Me A Coffee

Buy Me a Coffee

Providing news, forums, reviews, articles and information to the Airsoft community for more than 20 years! If we can help you drop us a line.

News in the forums

Cookies are used improve your experience. We'll assume you're ok with this, but you can opt-out if you wish. Accept Read More